Before Captains George Vancouver and Dionisio Galiano arrived in English Bay in 1792, Jericho Beach was home to a Musqueum Nation village (Ee’yullmough).  Trees from Jericho were used to repair the first European ships.

“Jericho” is a corruption of “Jerry’s Cove”, named after Jeremiah Rogers who logged the virgin forests of the area in the 1860s.  A few stumps can still be found in the park.  Jericho Charlie (Chin-nal-set) ran freight for Rogers by 44′ canoe from Hastings Mill store near the current Gore Street.  Jericho lived at the end of the beach.*

Following logging, Jericho was a park area where people came for picnicking.  They came by barge from downtown because there was no road.  A large part of the area was leased to the Jericho Country Club 1890 – 1919 for the first golf course in Canada west of Ontario. 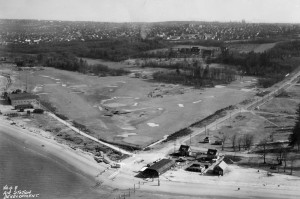 In 1920, the Jericho Beach Air Station was established following Ottawa’s move to establish an air force on the west coast.  A concrete airstrip was built, the remant known as ‘marginal wharf’ remained until 2011.  Barracks and other buildings were constructed.   Its role grew from RCAF sea boat training from 1924 to a more defensive role up to and during WWII.  The current sailing centre, Youth Hostel and Arts Centre are buildings remaining from the military base.

In 1965 the federal government announced it would hand over 150 ft wide strip along the waterfront to the city and sell the rest for $12 million for housing.  Luckily this didn’t happen.  In 1969 a different plan was proposed and agreed to by the City of Vancouver which envisaged (1) some land turned over for parkland; (2) the top 38 acres along W 4th sold for housing and (3) Point Grey Road extended across Jericho lands to join up with Marine Drive.

In those unregenerate days public input was not looked for, so the scheme was sprung on an unsuspecting public as a fait accompli.  However, the idea of citizens having a say was beginning to take hold and at a public meeting in 1971 600 angry people denounced city officials for this plan and demanded that the whole 120 acres be retained as parkland – no road and no housing.

The Jericho Park Committee was formed and started the long, frustrating job of bringing governments to listen to the will of the people.  There was a 1000 ft long petition with 20,000 signatures.  Finally, in 1973 the lands were sold back to the city.  The Sailing Centre was established shortly thereafter   Jericho was the site of the UN Habitat Forum in 1976, the last memento of which is the tree-form carving just east of the sailing club. 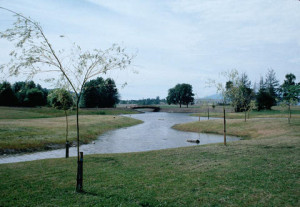 The battle continued as to how the park itself was to be landscaped with the final plan presented in 1982.  The ponds were created in what was a naturally marshy area, but some early proposals from the Park Board included a pitch & putt course, playground, even a minature railway like the one in Stanley Park.  These were turned down by the community which wanted the area to remain a ‘passive’ area and left as natural as possible, which resulted in the park as you see it today.  In 1989, to enhance habitat, the concrete runway was covered by a mountain of fill to create a rough meadow.+

In the following years native shrubs were planted by community groups including Nature Vancouver and there was a lot of work removing invasive plants in some areas.  The Jericho Stewardship Group formed in 2004 to continue these efforts in a more organized manner.